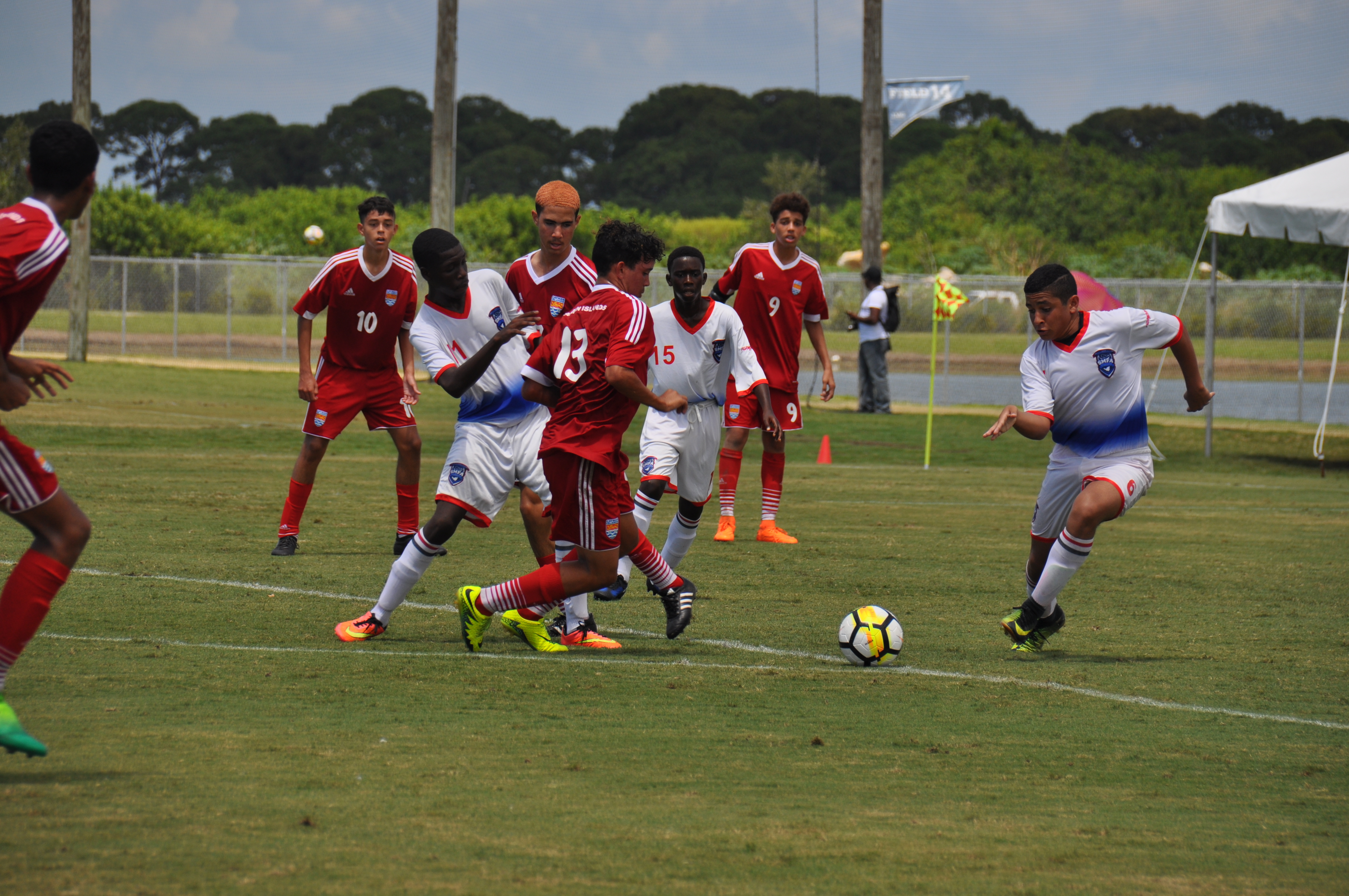 The Cayman Islands Under 15 Boys’ National Football secured top spot in Group G at the 2017 CONCACAF Under 15 Boys’ Championships with a convincing 4-0 victory over Saint Martin in the final group game at the IMG Academy in Bradenton, Florida.

The local boys kicked off their final group game under dark and gloomy skies as a torrential rain storm soaked the sprawling sports complex prior to the 11:00 am kickoff.

The downpour was a ‘good luck’ charm as the Cayman team was awarded a penalty in the first minute of the game when Jahmai Griffiths was fouled in the Saint Martin penalty area chasing a through ball.

Scoring so early in the game can sometimes severely affect a team’s game plan as over-confidence can quickly seep in. The local boys were not going to let that happen. With the lead, the Cayman team fell into their possession game with Saint Martin resigned to chasing the game.

Cayman’s goal keeper Theo Whiteside, was largely untroubled throughout the course of the game as the defence, marshalled by Luke Byles and including Tommy Kehoe, Micah O’Garro and Daniel Wallace, were exceptional.

In the 30th minute, Cayman’s dominance was rewarded with a second goal when Jahrion Bodden hit a 25-yard screamer past the outstretched arms of the Saint Martin goal keeper.

A minute before half time, the Cayman team rounded off an exceptional half as Corey Smith raced onto a through ball and blasted his team into a 3-0 lead.

As with their previous game against Bonaire, the coaching staff decided to inject new blood into the line-up as a rash of substitutions were made. On came Victor Thompson Jr., David Pitcairn, Kameron Bennett, Jonah Sigsworth, Jaden Ebanks and Gunnar Studenhofft to bolster team play.

The substitutes fit into their respective roles very quickly and the Cayman team continued their assault on the opposition’s goal.

Barry-Dre Tibbetts and Jackson Kirkconnell worked tirelessly in the midfield to create numerous opportunities for players around them. Young Kirkconnell masterminded the team’s fourth goal as he played a wonderful through ball to Gunnar Studenhofft who placed his effort neatly into the corner of the Saint Martin net.

Cayman had a number of chances to inflict further misery on their opponents as Jonah Sigsworth and Victor Thompson Jr. came close to finding the back of the net. Barry-Dre Tibbetts blasted a shot off the crossbar and Micah O’Garro was flagged for off side after he thought he had added to his team’s goal tally.

With time winding down, the local boys returned to their passing game and played out the final few minutes to secure top spot in Group G with three wins out of three.